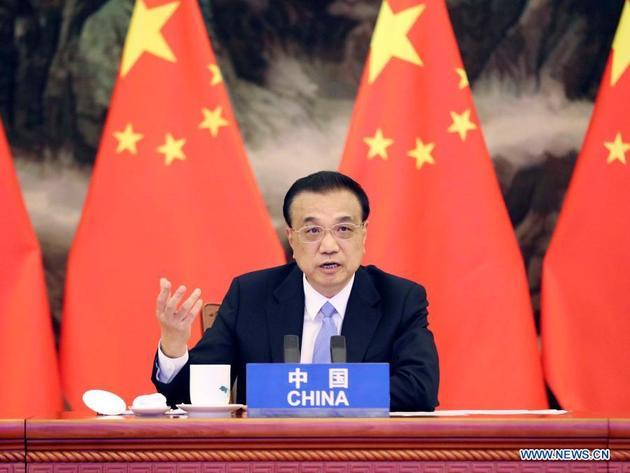 The signing of the Regional Comprehensive Economic Partnership (RCEP) is "a victory of multilateralism and free trade," Chinese Premier Li Keqiang said on Sunday.

Li made the remarks as he attended the fourth RCEP Summit, held via video link.

"The signing of the RCEP is not only a monumental achievement in East Asian regional cooperation, but more important, a victory of multilateralism and free trade," Li said.

With the largest participating population in the world, the most diverse membership and the greatest development potential, the free trade bloc will strongly advance the overall recovery process of the regional economy, inject new impetus into regional development and prosperity, and act as an important engine for driving global economic growth, Li said.

The RCEP will help realize a high-level opening-up for trade in goods and services, as well as investments, among regional countries, greatly lift the level of regional trade and investment liberalization and facilitation, and strengthen the attractiveness and competitiveness of the region, according to Li.

The RCEP was signed at a time when the COVID-19 pandemic is still raging across the globe, and the world economy is in a deep recession with contracted global trade and investment and rising protectionism and unilateralism.

"After eight years of negotiations, the signing of the RCEP shines light and hope through dark clouds under the current international situation, showing that multilateralism and free trade are the right way forward, and remain the right direction for promoting the growth of the world economy and the progress of humanity," Li said.

The RCEP allows people to choose solidarity and cooperation when facing challenges, instead of resorting to conflict and confrontation, and to choose mutual assistance and support, rather than follow a beggar-thy-neighbor approach or sit by and do nothing, he said, adding it shows the world that opening-up and cooperation are the only way to achieve mutually beneficial outcomes.

The ASEAN countries have played an important leading role in the negotiation process of the RCEP, Li stressed, pledging to continue supporting the ASEAN centrality and advance the follow-up implementation of the RCEP.

He expressed hope that the parties involved would complete their domestic approval procedures as early as possible to allow the trade pact to take effect and benefit the enterprises and the people at an early date.

Li also called for more coordinating efforts in specific arrangements, such as tariff concessions, the standard of origin, facilitation measures and relevant rules, to ensure the smooth implementation of the trade pact.

"We should uphold openness and inclusiveness, deepen all-round and mutually beneficial cooperation, and work jointly to make RCEP a major platform in regional economic and trade cooperation to benefit people of all countries," Li said.

Leaders of the RCEP member states spoke highly of the formal signing of the agreement, believing it stands as a historic and significant milestone. Especially in the context of the severe impact of COVID-19 on the world economy, RCEP, as the largest mega free trade agreement, will strongly promote regional prosperity and stability, bring hope to speeding up world economic recovery in the post-COVID-19 era, help foster an open world economy, and boost trade and investment liberation and facilitation.

They noted that the signing of the RCEP also means that all parties support an open, fair and win-win global trading system, support multilateralism, abandon protectionism and unilateralism, and stay committed to solidarity and cooperation in addressing challenges.

All parties stated that the RCEP would remain open to India and welcome India to join the pact as soon as possible.

After the summit, Li and leaders of other countries attended the signing ceremony of the RCEP. Chinese Commerce Minister Zhong Shan signed the agreement on behalf of China.